A SHORT NOTE ON ANARCHIST CONCEPTS

Briefly defined anarchy and anarchism mean "system and management without ruler(s), i.e. co-operation without repression, tyranny and slavery, ideally or practically". We have introduced the word practically to the definition because it may be anarchy of low degree although there are a few narcotic slaves (drug addicts) and some "wage slavery" in society, as in the Anarchy of Norway . We don't allow for regular slavery in any anarchy. More precise definitions of anarchy and anarchism vs other -isms, i.e. archies, are given by the following ten basic principles:

( 2 ) Archies may be expressed as x-archy, where x is one of a set of systems characteristics of archs, say, ( mon, olig, poly, plut, ochl, matri, patri, hier, etc; but not an) or a logical union of several x-es reflecting different forms of archy/archies as opposed to anarchy/anarchies, i.e. the negation of x-archy = archies.

(10) Not valid concepts. Concepts as anarcho-archy = anarchy-x-archy in any form, meaning system, coordination and management "both with and without ruling and rulers" at the same time and place, are not allowed for, because such concepts are contradictive, and thus are nonsens and not logical and scientifical, because this is in reality not possible, and anarchism and anarchy are about realities. Thus anarcho-marxism, anarcho-capitalism = anarchy-plutarchy, anarcho-ochlarchy, anarcho-chaos, anarchy = chaos, anarchism = anarchy = minimal state or libertarian state, state in general, anarcho-statism, anarcho-authority, etc, are nonsense and not valid concepts, but confused Orwellian "1984" "newspeak" that is not anarchist, but authoritarian, i.e. chaotic, and should be avoided.

These axioms should be seen as fertile working hypothesis, not dogmas or absolutely truths.

In addition to these axioms and most basic principles of social sciences, anarchy and anarchism and other -isms, other principles of policy defining authority more precise and concrete in a societal context, structural and functional, performance included, must be introduced, and the significant level of anarchy vs archies must be calibrated for applied and practical research and analysis. This is a.o.t. discussed on the file (click on:) System theory and economic-political map , search for 'calibration' and 'principles'. The axioms (1) - (10) are consistent with the economical-political maps below: 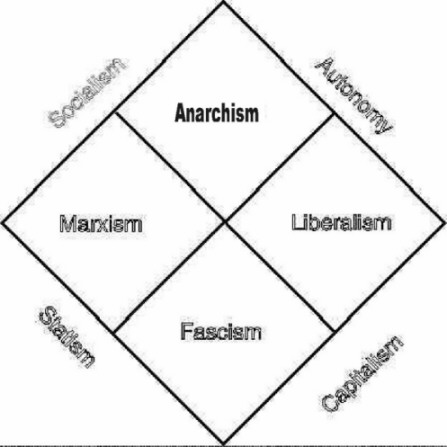 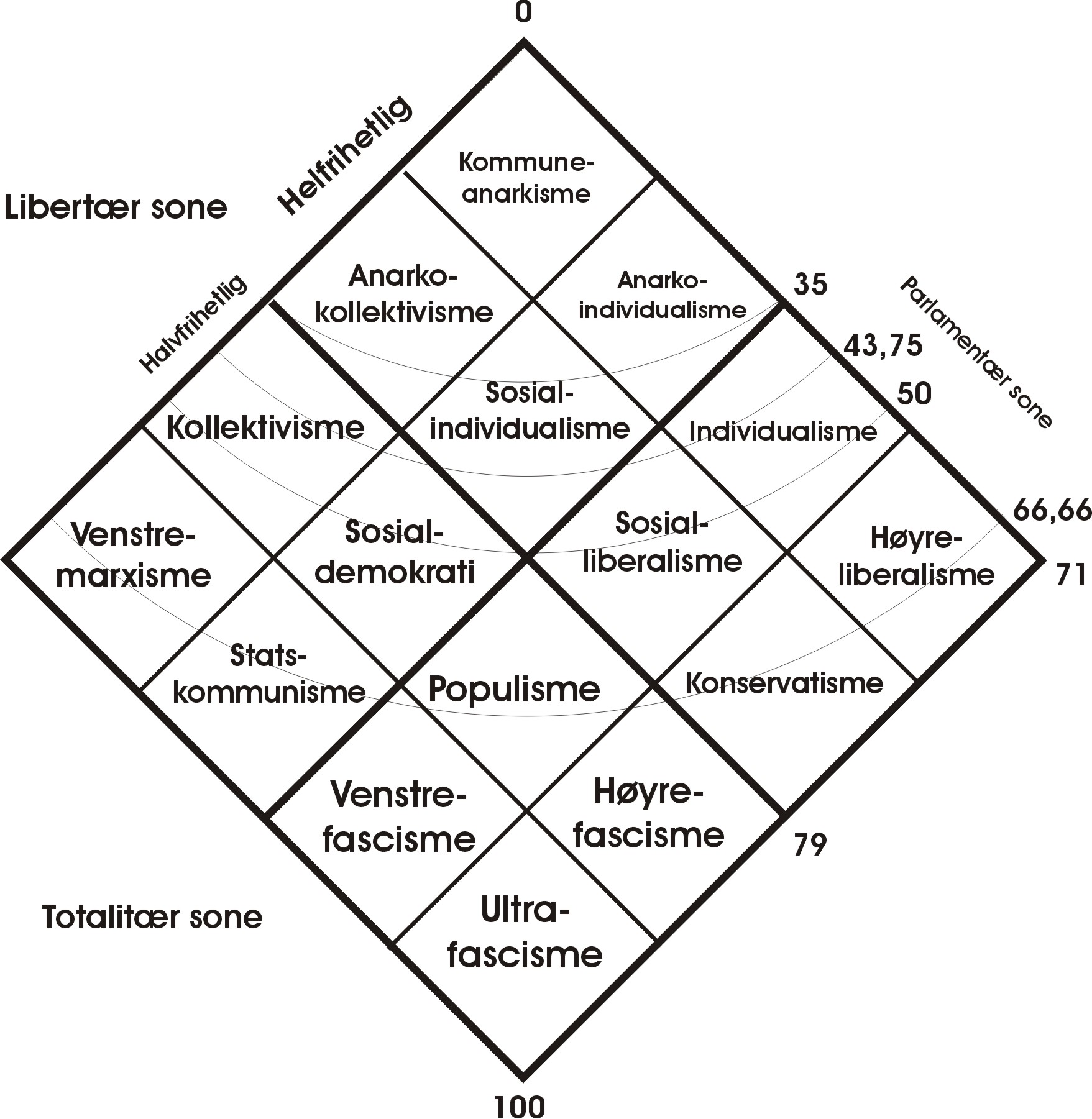 *) The stars indicate the position of the Norwegian economical-political system after the revolutionary change in 1994/95.

The map to the right with four quadrants illustrates the four main forms of economical-political systems with a) all forms of anarchies in the upper quadrant in the middle, and b) all forms of archies in the three other quadrants. The quadrants are. 1. Marxism (State socialism), 2. Fascism (populism included), 3. Anarchism, 4. Liberalism. The map with the 16 sectors defines the four main different tendencies or subsystems of the four main forms of economical-political systems respectively. (Esquerda means left, and direita means right - the other names are easy to understand in English).

Anarchism and anarchy are socialism plus autonomy as defined above, see the economic-political map, a system significantly flat organized both economic and political/administrative, efficient and fair, without top heavy pyramid economically and/or political/administrative, based on significant statism and/or capitalism. The results of the economic-political systems of the anarchies Norway, the Swiss Confederation and Iceland confirm the basic libertarian hypothesis that a horizontal structure, i.e. a significant autonomous and socialist system, is efficient and fair. Empirical data of other systems confirm that a top heavy structure, capitalist (economical plutarchist) and/or statist, is unfair and/or inefficient.